From his breakthrough work with Bay Area stalwarts, Hush, to his dramatic leap to international renowned with ´3´ featuring Keith Emerson & Carl Palmer, to his performances with the legendary Ambrosia, combined with his long running project - Alliance, with members of Boston, Sammy Hagar and Night Ranger, to the December People, along with his consistent rise as a much in demand record producer, purveyor of the low end and songwriter with the Greg Kihn Band, the music never stops. Most recently he's the heart and soul behind the new 3.2 album, the long awaited follow up album to 3's 'The Power of Three', which features contributions from Keith Emerson . Proving again that there is never a dull moment in Robert´s world.

Pre Order your Limited Edition Vinyl LP version of Third Impression and New 3.2 - Life is Music... Tees from the Store

Selecting “A Fond Farewell” as the first single from “Third Impression” was an easy choice for Robert and Frontiers. “It can be difficult for an artist to pick out which song from an album should be the first to be released to the world,” Robert says. “As on the previous 3.2 album “The Rules Have Changed”, Frontiers’ choice was correct. Not only because of the current state of the world, but also for reasons that true fans of 3.2 will understand, “A Fond Farewell” is the perfect launch for the final works started with the band 3.”

“…the Highlight of the Evening”

Friday’s headliner is 3.2 Featuring Robert Berry. Berry makes an unusual start explaining his backstory and introducing his band even before playing a note. What follows, however, is the highlight of the weekend, with Berry, keyboard player Andrew Colyer, guitarist Paul Keller and former Spock’s Beard drummer Jimmy Keegan showcasing a diverse range of songs from the 3 To The Power of Three album (recorded by Berry, Keith Emerson and Carl Palmer in 1988), a pair from last year’s 3.2 album plus No One Else To Blame and Last Ride Into The Sun from Berry’s excellent Pilgrimage To A Point. They also play their leader’s interpretations of Yes’ Roundabout, Jethro Tull’s Minstrel In The Gallery, Genesis’ Watcher Of The Skies, and a slice of ELP’s Karn Evil 9. All are distinctive reworkings of the originals, and prove hugely entertaining, with Minstrel truly swinging and Roundabout in particular sounding edgier. After a run of 10 shows, Berry and his band are well drilled, with Colyer’s keyboard mastery in particular impressing, and deserve greater prominence.

Good news! The long-awaited new album from Alliance marks its official release on May 24. All indications are that this collaboration between Gary Pihl, Mr. David Lauser and Robert Berry is their best effort yet. So stand up, do the right thing and pre-order yours today. You'll surely find it in all the usual places, including better retail outlets everywhere, digital platforms and from www.Escape-Music.com .

THIS JUST IN! - Alliance – Fire & Grace notches Number 17 on Warren Kurtz’s Fabulous Albums of 2019 and coming in at an impressive Number 5 for Fabulous Songs of 2019, from the Fire & Grace’, is ‘Uncertain’.

Mr. Kurtz is a Contributing Editor at Goldmine, writing the In Memoriam and Fabulous Flip Sides series.

Only 300 of these 3.2 – The Rules Have Changed – Numbered Limited Edition Vinyl LPs are available. Signed By Robert Berry. The special includes Numbered Limited Edition Vinyl LP, Signed By Robert Berry along with a two-sided, full color ‘3/3.2’ custom guitar pick, and promo photo. These items are available via PayPal from our friends at StNicksPicks.com 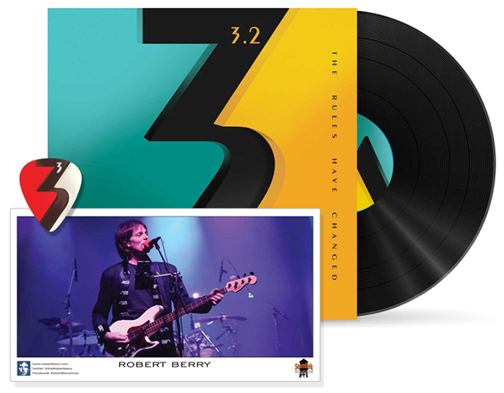 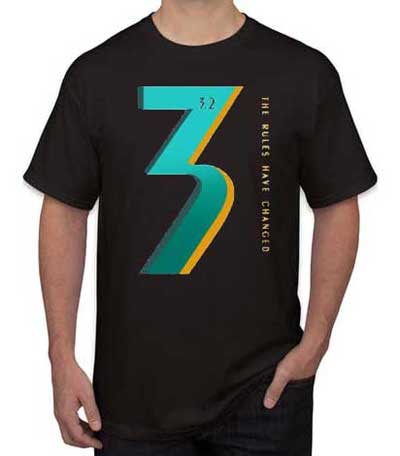 Inspired by the new 3.2 cover art, our stylist worked with our designer to come up with this handsome ready-to-wear pre-shrunk high quality Hanes 100% cotton tee-shirt. We know your style is personal, but we think you could wear it alone or wear it with pants, it's your choice.

"...Berry remains a master of the electronic keyboard, some of his most haunting and convincing playing comes from the piano,..."

...it's a resoundingly solid and accomplished progressive rock album."

It’s really a great album. Suprisingly has become one of my favorite albums of all time, riviling Tarkus, Abbey Road, 90125, Talk and ( guilty pleasure ) Pretty Odd.

Great release, amazing tribute. - Great release. The roots of this may hearken back to 1988, but the sounds are fresh and lively. You don’t hear this progressive rock anymore on the radio, do yourself a favor and buy this. Keith Emerson’s DNA is all over this, and Robert Berry does a masterful job of putting all the bits and pieces, ideas and concepts, together in a fitting tribute that would make his friend and mentor proud. I can’t stop listening to it, I want more!

So Much More than just GREAT MUSIC ! - Where do I start? I could go on and on writing in detail for hours about Robert and Keith's creation. In an attempt to keep it brief enough to be readable, I'll just say - Incredible composition, production and musicianship by Robert in his playing of all the instruments. He captured Keith's sounds, spirit and essence. Such intelligent and thoughtful lyrics. And...the liner notes bring tears every time I read them. Along with everything else, Robert has an outstanding command of the written word. Finally, the photos, which are beautiful and also summon the emotions make this a complete package. I was so looking forward to this creation and it exceeded my expectations by light years.

Wow! Just wow... - Robert Berry has created an excellent follow up to the "3" masterpiece. 3.2 is a well crafted album. I'm very impressed with Berry's achievement, using bits and pieces from Emerson and a lot of talent, he has created some worthy songs... Keith would be proud! Great instrumentation, arrangements, production, mixes... it's a great album! Thank you, Robert Berry... for putting in energy, skill, thought & time it took to fulfill this dream of yours... you see, it was our dream too and now we get to hear it! And Robert, I agree with Keith... lose the beard, dude!

Congratulations Robert Berry! I know it’s been quite a journey but your perseverance and talent did it. He’s smiling wide upon you…..

I have heard the entirety of ‘The Rules Have Changed,’ the 30-years-in-the-making follow-up to 3 (Emerson, Berry, Palmer)’s ‘3 to the Power of 3.’ It is absolutely superb. It’s an expertly-executed and performed album that takes the spirit of the first 3 release and propels it into edgier and more adventurous territory, while retaining the melodic qualities of its predecessor. ....The only thing to do is listen to the results for yourself.

Based on the sample track “Somebody’s Watching,” which absolutely captures the sound of the original band at their most daring and delightful, I’m definitely looking forward to The Rules Have Changed, and I wish Berry’s 3.2 project all the success in the world.

Robert Berry's 3.2 - The Rules Have Changed

The new album consists of some past '3' writing from 1988, some newly written last efforts from Keith, and some songs written exclusively by me after Keith’s death.” The album’s release is previewed by the single ‘Somebody’s Watching,’ which you can hear via the link below.

Sonic Perspectives correspondents Ron Matthews and Geno Salvati sat down with Berry, to discuss the creation of this material with Keith and the excitement building in the prog-rock world due to the album release, along with stories of touring with Keith and Carl in the band 3...